Catholic Church is Guilty as Sin

The Catholic Church has been rocked by sex abuse scandals first uncovered in the mid-1980’s. A Catholic priest, Gilbert Gauthe, pled guilty to molesting 11 boys. There were allegations that he may have molested as many as 100. When his pedophilia first became known to his superiors, he was reassigned to a different parish. The police were not called. In fact, the following year, Gauhte was appointed chaplain to the diocesan Boy Scouts!

When Gauthe resumed his sexual pursuit of boys, his supervisor elevated the concerns to the vicar general of the diocese who again, did not notify police but instead suggested Gauthe needed treatment.

In 1993, the Reverend James Porter was sentenced to 18-20 years in prison for the sexual abuse of 28 young boys. Those are just the ones he pled guilty to. In interviews he has admitted to over 100 cases of molesting children. As information became available of the church’s actions in regard to not only Porter, but former priest John Geoghan who also abused over 100 boys including a 4 year old, it became clear the Catholic Church was guilty of a systemic coverup.

In 1997, a Dallas jury awarded 11 plaintiffs $119 Million dollars after unanimously finding the Dallas Catholic Diocese of gross negligence and concealed information regarding its handling of priest Rudolph Kos, who sexually molested at least 50 boys while working in the Dallas parish.

In 2005, the Pope himself was named in a lawsuit for his part in the coverup of a sexually abusive priest under his watch in Texas. His lawyers asked then President George W. Bush for immunity from the lawsuit.

So how has the Catholic Church responded to the continually expanding discovery of sexual abuse by its priests for decades? First, in 2002, they wrote up a Charter for the Protection of Young People. This was criticized as not being strong enough against what is a criminal offense that should be immediately reported to civil authorities. The Charter seems to focus on counseling. Then in 2005, they wrote up the Criteria for the Discernment of Vocations with regard to Persons with Homosexual Tendencies. This was criticized for seeming to equate homosexuality with pedophilia. In 2008, during Pope Benedict’s first visit to the United States he admitted he was deeply ashamed and that he would ensure no more pedophiles entered the Catholic priesthood.

In November of 2008, a US Court of Appeals ruled that the Vatican can be sued for the abuse of children by its priests and that it not immune due to the Foreign Sovereign Immunities Act.

The John Jay Report, the most comprehensive study done of the issue of Catholic sex abuse cases, concluded that in cases of substantiated or credible allegations of abuse, the abusing priest was removed from the clergy approximately 6% of the time.

What I find most baffling is the Church’s continued inability to see the abuse for what it is; sexual abuse of children by pedophiles. As recently as April of this year, the Vatican secretary of state stated in a visit to Chile that homosexuality is the problem as there is a link between homosexuality and pedophilia.

Lastly, in what I believe to be its most oblivious and tone deaf position to date, the Catholic Church has released new rules for what it considers “grave crimes.” Investigators from the Congregation for the Doctrine of Faith (CDF) will handle investigations into these “grave crimes.” The list of “grave crimes” is as follows:

Yes, these “grave crimes” are all lumped together in the same bucket and handed over to the CDF to investigate. Not only that, but the CDF is under no obligation to hand over its investigation of abusive pedophiles to civil authorities.

To be clear, I think it’s important to look at these “grave crimes” individually to see how they could logically be considered comparable in terms of gravity. For example, host desecration. The consecrated host, also called the Eucharist, is a piece of bread. A wafer of bread actually, said to symbolize the body of Christ. So if you were to desecrate it, which means to treat it disrespectfully or contemptuously, you’d be guilty of a “grave crime” in the eyes of the Catholic Church and investigated by the CDF. Rape a young boy? Same level of offense.

Heresy means to propose something that conflicts with religious dogma. If you were to do so, according to the Catholic Church, you’d be guilty of a “grave crime” and subject to investigation by the CDF. Rape a young boy? Same level of offense.

The Seal of the Confessional: “The sacramental seal is inviolable; therefore it is absolutely forbidden for a confessor to betray in any way a penitent in words or in any manner and for any reason.” Fair enough. If you violate it, you are guilty of a “grave crime” and subject to investigation by the CDF. Rape a young boy? Same level of offense.

Should a priest, bishop or other Catholic member of clergy attempt to ordain a woman into the priesthood, they are guilty of a “grave crime” and subject to excommunication after investigation by the CDF. Rape a young boy? Same level of offense.

The Catholic Church has shown itself incapable of not only handling criminals in its midsts, but apparantly the inability to even recognize the crime. Andrew Madden, a former altar boy who brought the first public lawsuit against the church of Ireland said this about the new rules:

The US charity Survivors Network of those Abused by Priests summed up the new rules rather simply: “They missed the boat.”

All in all, the Catholic Church has paid out over $2 Billion dollars to settle civil suits against it for its handling of sexual predator priests, most of that in the last six years. Based on their new and improved rules, I expect they haven’t seen the end of these civil suits yet. 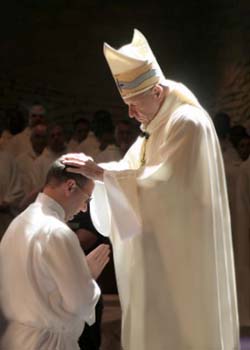