On August 4, 2010 Chief U.S. District Judge Vaughn Walker in San Francisco declared that California’s Proposition 8, called by some the “Protect Marriage Act,” was unconstitutional. Prop 8 was approved by California voters in 2008 and it made same-sex marriage illegal in the state of California.

You can read the entire ruling here, and it’s absolutely fascinating reading. What I find most mind-boggling is the case the defense put up in support of Proposition 8. One of their witnesses, David Blankenhorn, is the founder of The Institute for American Values, a “think tank” committed to “contributing intellectually to the renewal of marriage and family life and the sources of competence, character, and citizenship in the United States.” Mr. Blankenhorn testified to his opinion that marriage is “a socially-approved sexual relationship between a man and a woman” with a primary purpose to “regulate filiation.”  If you’re like me, you read that and said “huh?” Well, filiation is “the condition or fact of being the child of a certain parent.” Oh. So what Blankenhorn basically testified to is that marriage is about being parents. The Judge spent many pages of his ruling reviewing Mr. Blankenhorn’s credentials, his education, the books he’s written and the cases he cited for evidence. Ultimately, the judge gave him the credibility he deserves by saying in part:

“Blankenhorn lacks the qualifications to offer opinion testimony and, in any event, failed to provide cogent testimony in support of proponents’ factual assertions.”

Ouch. The Judge also went on to say about Mr. Blankenhorn:

“The court now determines that Blankenhorn’s testimony constitutes inadmissible opinion testimony that should be given essentially no weight.”

Another of the defense witnesses in this case, Mr. Hak-Shing William Tam, is the Secretary of the America Return to God Prayer Movement. Mr. Tam’s shockingly ridiculous testimony includes these tidbits:

and that gay marriage will

When the Judge asked Mr. Tam for his sources, he provided the National Association for Research and Therapy of Homosexuality, whose  position is that  their “clients have the right to claim a gay identity, or to diminish their homosexuality and to develop their heterosexual potential. The right to seek therapy to change one’s sexual adaptation should be considered self-evident and inalienable.” When the judge asked why Mr. Tam used this particular source Mr. Tam stated because “he believes what they say.” With regards to his source for connecting same-sex marriage to polygamy and incest, Mr. Tam says his source was “the internet.” Yes folks, the internet told him.

There was lots of testimony in this case and the Judge went to great lengths to lay out the legal rationale for his ruling. It addresses every point you can think of regarding marriage, parenting, discrimination and sexuality. But most importantly to me, and hopefully to you Faithful Reader, is this:

“Fundamental rights may not be submitted to a vote; they depend on the outcome of no elections.”

The Constitution of the United States give us our rights as Americans, and the 14th Amendment rings loud and clear:

“…No State shall make or enforce any law which shall abridge the privileges or immunities of citizens of the United States; nor shall any State deprive any person of life, liberty, or property, without due process of law; nor deny to any person within its jurisdiction the equal protection of the laws.”

The Constitution gives us the right of life, liberty and property and says no state can take it from us without due process of law. It also tells us no state can deny to any person equal protection! This is incredibly powerful stuff, designed to protect us as individual humans from a government that would seek to restrict our freedom. Such a thing can and should never be taken lightly. Our freedom is everything; it is what men and women have fought and died for since our country was founded. Yet the proponents of Proposition 8 sought to take those freedoms away from a certain group of people based on opinions, innuendo, fear and prejudice. The proponents of Prop 8 spent millions of dollars in their campaign to get California voters to willingly give up their freedoms and the fact that they succeeded in getting 52% of the state’s residents to agree to it is a sad commentary on our society.

In conclusion, the judge ruled on the side of freedom. Individual freedom, without prejudice, without discrimination and if you’re a romantic at heart, you could argue he ruled in favor of love.

I’ve added this link where Ted Olson, one of the attorneys who successfully argued the case, explains clearly and concisely why the ruling was the correct one. It is a quick, but thorough, legal education.

In case you haven’t read them in a while my friends, here are Our Rights:

Congress shall make no law respecting an establishment of religion, or prohibiting the free exercise thereof; or abridging the freedom of speech, or of the press; or the right of the people peaceably to assemble, and to petition the Government for a redress of grievances.

A well regulated Militia, being necessary to the security of a free State, the right of the people to keep and bear Arms, shall not be infringed.

No Soldier shall, in time of peace be quartered in any house, without the consent of the Owner, nor in time of war, but in a manner to be prescribed by law.

The right of the people to be secure in their persons, houses, papers, and effects, against unreasonable searches and seizures, shall not be violated, and no Warrants shall issue, but upon probable cause, supported by Oath or affirmation, and particularly describing the place to be searched, and the persons or things to be seized.

No person shall be held to answer for any capital, or otherwise infamous crime, unless on a presentment or indictment of a Grand Jury, except in cases arising in the land or naval forces, or in the Militia, when in actual service in time of War or public danger; nor shall any person be subject for the same offence to be twice put in jeopardy of life or limb; nor shall be compelled in any criminal case to be a witness against himself, nor be deprived of life, liberty, or property, without due process of law; nor shall private property be taken for public use, without just compensation.

In all criminal prosecutions, the accused shall enjoy the right to a speedy and public trial, by an impartial jury of the State and district where in the crime shall have been committed, which district shall have been previously ascertained by law, and to be informed of the nature and cause of the accusation; to be confronted with the witnesses against him; to have compulsory process for obtaining witnesses in his favor, and to have the Assistance of Counsel for his defense.

In suits at common law, where the value in controversy shall exceed twenty dollars, the right of trial by jury shall be preserved, and no fact tried by a jury, shall be otherwise re-examined in any court of the United States, than according to the rules of the common law.

Excessive bail shall not be required, nor excessive fines imposed, nor cruel and unusual punishments inflicted.

The enumeration in the Constitution, of certain rights, shall not be construed to deny or disparage others retained by the people.

The powers not delegated to the United States by the Constitution, nor prohibited by it to the States, are reserved to the States respectively, or to the people. 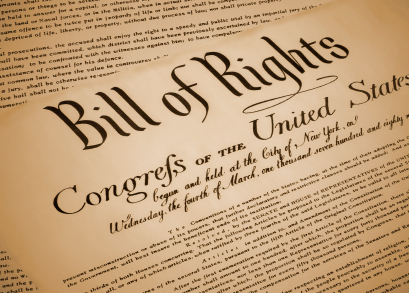