Checking in on the Republicans

As I wrote a few months ago, the Republicans stormed into power across the country riding a wave of voter anger and Tea Party fueled angst over government spending. A prolonged unemployment slump caused voters to pull the lever for the GOP who promised to restore sanity to government spending and end job killing legislation like Health Care Reform.

A quick look at the news in Corporate America will show you that corporations are doing just fine. In the third quarter of 2010, corporate profits hit an all time quarterly high and today, companies are sitting on a cash hoard of almost $2 Trillion dollars. They’re not hiring much though, and when they do, it tends to be overseas where labor is cheaper.

So the Republicans are sure to take these issues on as the voters expect them to. They campaigned on economic issues and jobs, so undoubtedly this is why the voters sent them into power. As I wrote about in my last post, there were some rumblings from newly elected Republicans, and Republicans who had been thwarted by Democratic Governors or Democratic Majorities, of bringing up many social issues they held dear. With unemployment persisting, housing still in decline and voter anticipation, surely the GOP leadership will guide the agenda to attack the nation’s economic woes.

House Speaker John Boehner (R)-Ohio stepped in front of TV cameras the day after the House voted to repeal the Health Care Reform Law and announced GOP lawmakers would be introducing two separate bills to toughen restrictions on taxpayer funding of abortions. Leaders promised swift action. The Speaker said “it reflects the will of the people” and that it’s “one of our highest legislative priorities.” 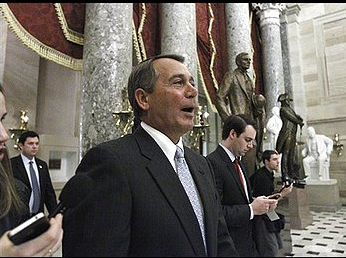 Thirty minutes later, Republican leaders provided some insight into their tougher stance on spending. They will introduce a budget with sharp cuts in or complete elimination of the National Endowment for the Arts, the National Endowment for the Humanities, the Corporation for Public Broadcasting, Title X birth control and family planning, AmeriCorps, the Energy Star program and work on fuel-efficient cars, and the United Nations Intergovernmental Panel on Climate Change. They indicated this is what the voters elected them to do.

While the GOP wanted to cut $2.5 Trillion dollars in spending over the next 10 years, the cuts they’ve proposed amount to $330 Billion over 10 years. They avoided the big budget items and went after PBS, family planning and climate change study.

This is no surprise to me and likely no surprise to anyone who follows politics. Predicting what the Republican party will do is like predicting the sun will rise in the east. The only thing I can’t predict is voter response. When cutting funding to Sesame Street and Planned Parenthood doesn’t produce millions of jobs, will the voters be outraged? Will economic issues actually get to the forefront of House political activity? Does anyone really think the government can force those companies sitting on a mountain of money to hire American workers?

← If you’re a FOX News viewer, you’re the Most Misinformed
Science Advances our Cause →