Am I wrong about Intervention?

I have a short list of things I hate. I believe the word to be a powerful one so I try to save it for truly hateful things.

My hatred of war runs deep, perhaps because I spent some time in a minor one, but more likely because I’ve read the history of many of them. Human beings killing, maiming, and torturing each other over land, faith, tribalism or loyalty to country. The price tag in human suffering and economic cost is steep, and the results are often futile.

There is an official policy of non-intervention for the world of nations that is the UN. However even before that, for centuries, there has been an international policy of not meddling in other country’s affairs. The US has had a long-standing policy of non-intervention starting with our very first President. Our Founding Fathers warned against foreign entanglements and the policy was a major issue in the involvement of the United States in every war we’ve gotten involved in.

I was too young to be aware of Vietnam being born in 1963, but I read many books on the war and it sickens me to this day. The draft, a literal ownership of human beings by the government, may be the most vile thing our nation has ever done to its citizenry. The intervention in the affairs of Vietnam, against all international policy of non-intervention, cost the United States 58,151 lives. The Vietnamese report they had over 1 million casualties, but that number is still debated. Not only was the war a tragic waste of human life, but it ripped the US apart politically. The age of naive trust in our government was over, and in the end, Saigon fell.

I was much more directly involved in our decision to push Iraq’s army out of Kuwait when Saddam Hussein invaded his neighbor in 1991. I was a Scout Helicopter pilot for the 3rd Armored Cavalry Regiment during Desert Shield and then Desert Storm and was part of the large sweep across Iraq to hit the Republican Guard from their right flank. 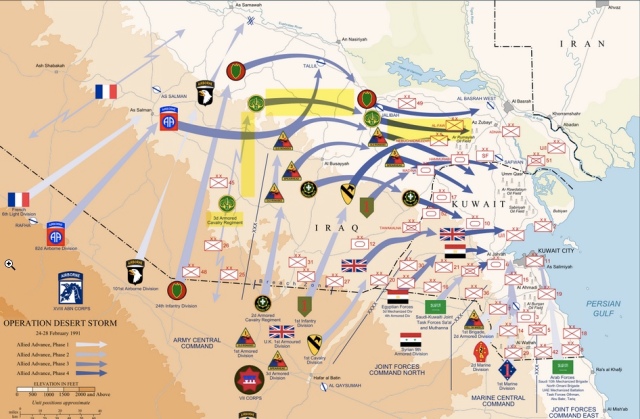 I don’t remember what I thought of President Clinton’s decision to get us involved in Bosnia. I had just gotten out of the Army and was trying to establish a new career as a civilian. My wife and I had a small child and I honestly think I didn’t pay much attention to it.

I semi-supported the Afghanistan invasion as I was hurting as bad as every other American after 9/11 and if that’s where Al Qaeda was, then we needed to go after them. After a time it became clear that our mission there would fail. The enemy left Afghanistan as fast as they could and spread to all parts of the world. After all, the men who attacked us were dead and they weren’t Afghani, they were Saudi and Egyptian, two of our “friends” in the region.

The decision to invade Iraq incensed me to no end, mostly because it was based on lies, which I knew from the onset, but also because I knew it would be a quagmire and cause untold misery and death.

So my personal policy of non-intervention matched that of our Founders and the general consensus of nations.

President Obama has increased the level of US involvement in the nation’s longest war; the Afghan War. I believe it to be a mistake and count it as my first of many disappointments with this  President for whom I held such high hopes. But then the Middle East seems to have just imploded. First Tunisia, then Egypt seemingly had democratic revolutions spring up from nowhere. These issues may have been building for decades but if they were, they were under the radar as far as US news coverage goes. I worried the US would get involved in Egypt but President Obama seems to have played that one just right. Since we had been giving Mubarak over a billion dollars a year, I guess we had a little clout and could diplomatically tell him his tenure as ruler was over.

Libya is another animal though. This latest Middle Eastern rebellion had a different feel to it from the outset. First of all, the US is not on what I’d call speaking terms with Qadhafi, so there would be no diplomatic influence there. But the biggest difference is that the Libyan Military, under Qadhafi’s orders, began killing their own populace. This slaughter of human beings in the streets of Libya is barbarism to such a degree, the international community felt they had to get involved and before you knew it, the US was helping enforce a no-fly zone in Libya and using Tomahawk Cruise missiles to try to limit the Libyan Military’s ability to massacre civilians in the street.

My initial reaction was as expected:

I’ve been reading Letters to a young Contrarian by Christopher Hitchens. In it, he tells of his account traveling to Bosnia during the conflict and it really moved me. Mr. Hitchens knows his history and lays out the ugly truth of tribalism and mass murder of human beings over religious faith and over land. He states:

“given the uneven way that borders and populations actually intersect, in Europe and the Balkans and the Caucasus, it would be suicidal to allow the forcible triumph of a demagogic and dictatorial regime, which sought to impose the tyrannical notion of congruence between “race” and “state.” This would negate the whole idea of Europe, not to say civilization, and could only lead to more war and further despotism.”

He reminds us that the world chose not to intervene when a Fascist dictator began taking land and killing Jews and how nations cried “Never Again” yet we watched as 10,000 men were butchered after they surrendered in Srebenica.

I think I am starting to understand Mr. Hitchens support for the Iraqi Invasion which I so opposed. It was a humanitarian intervention. Saddam Hussein had massacred innocent Iraqi citizens of a different tribe, slaughtered residents of a town from which attempted assassins hailed, and abducted and tortured countless adversaries throughout his tenure.

So maybe I’m wrong in my stand against intervening in foreign affairs. When the cause is right, when it is a humanitarian cause to stop the slaughter of innocents by a tyrannical regime, the “cleansing” of people of different faiths or ethnicity, perhaps we have no choice but to intervene. How can we stand by and watch as our brothers and sisters in the human race are subjected to torture and murder at the hands of the power structure? I don’t believe we can.