The GOP candidates for President-Part I. Is your underwear magical?

In this my first post previewing the 2012 contenders to the throne, i.e. the White House, I will focus on early frontrunner, Mitt Romney. Romney was a contender for the Republican nomination in 2008 until he suddenly threw in the towel and got behind John McCain. Political machinations were at work I suspect as the National Party leadership was playing the odds and Mitt did what was best for the party.

Romney was a successful businessman before becoming the 70th Governor of Massachusetts, which is a difficult state to spell correctly. His other claim to fame, repeated frequently during campaign stops in 2008, was his organizational success with the 2002 Olympic Games in Salt Lake City. 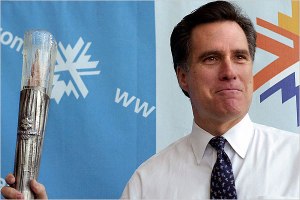 As Governor, his most noted accomplishment was health care reform, a four-letter word at the national level. Massachusetts provides nearly universal coverage to its citizens through subsidies and mandates. I think it’s an admirable and noble accomplishment, but conservatives and anti-government types may not agree, and Mitt’s going to need them in the primaries if he wants to win. We’ll see how he spins it.

A candidate for public office, especially at the national level, is going to be thoroughly vetted by the press, as they should be. It’s important for the voting public to get as much information as possible about the man or woman who would be President of the United States. Since this is not Mitt’s first time at the rodeo, many would be voters have a sense of who he is and what he’s about. They’ve seen him on TV, maybe heard a few speeches and know he was a Governor. But the Republican Primary is not the General Election. No sir, the Primary is a different beast altogether.  The Republican Primary is much more conservative than a General Election, especially in states with closed primary elections, where only registered Republicans can vote. The US Electorate is generally lethargic when it comes to voting even in General Elections, so Primary Elections are about hard-core political voters. These are the folks Romney needs if he wants to get the nod to represent the Grand Ole Party come November of 2012.

In my opinion, Mr. Romney needs to overcome a few obstacles to win over a conservative crowd of Iowans and South Carolinians in the early primaries. In a South Carolina Straw Poll for example, Romney barely moved the needle with only 8% of the vote, well behind winner Mike Huckabee.  Romney is going to have to show he’s a real conservative, not a centrist, deal-making, businessman type of Republican. As Governor of one of those New England states that tend to bleed blue, he picked a cabinet of strong managerial types and got to work on the finances. The Romney Administration cut spending, increased fees and cut corporate tax loopholes to bring the budget back into shape. That sounds pretty reasonable, but to tax and fee hating Republicans, this sounds suspiciously like a liberal. And that’s before we even talk about health care!

Romney was the primary mover behind the health care reform movement in Massachusetts. He even pushed for an individual mandate! To me, that sounds like the kiss of death and if I were running against Mitt, I’d hammer him every single day with charges of being for “Obamacare” even before Obama was.

Lastly, Mr. Romney was all over the board on same-sex marriage in MA and that’s not going to sit well with conservatives. Sure he ultimately endorsed a plan that didn’t allow same-sex marriage, but he was for it before he was against it, allowing civil unions in 2004, then instructing municipalities to issue marriage licenses as long as both parties were either in-state or planning to move to MA, and then finally dropping the whole thing as being too confusing.

The Constitution of the United States has this pesky provision that says no religious test will ever be required as a qualification for office, but when you’re looking for the Republican nomination, you need the religious right on your side, especially the Evangelical Christians who can get out the vote as if Jesus himself was driving the bus to the polls. If I had the opportunity to interview Mitt Romney, I’d have to ask him a few questions about his faith because I think his answers would really tell the voters something they should know: whether the man was completely credulous, gullible and child-like.

With these questions honestly answered, Republican primary voters can march into the polling place and cast their ballot for who they want representing them at the top of the ticket in November 2012.

Stay tuned for Part II where I’ll preview one of the theocratic candidates, Mike Huckabee.

← When a War is not a War
The GOP Candidates for President-Part II: Jesus and a Gun →