All Politics is Yokel

Christopher Hitchens, when asked what he thought of the Tea Party during an interview, turned the clichéd “all politics is local” into the title I’ve chosen as my commentary on the run-up to the Iowa Caucus. This unusual event in American politics is the first of the elections–although importantly not the first primary election–designed to award delegates to the candidates, and 2012’s cast of Republican caricatures has debated, run ads, taken unfortunate photographs at local fairs and given the 24-hour media networks something to blather on about for months.

The first bit of nonsense was the petty schoolyard argument of “who goes first,” as Iowa changed the date of their gathering of town folk following Florida’s decision to move their primary election up to January 31, 2012 (even though the National Republican Party told Florida they’d lose half of their delegates if they moved their primary). This unfortunate bit of one-upmanship has subjected the American public to an extended look at these candidates as the election cycle begins in earnest earlier than necessary.

This agricultural state of white Americans—less than 1% of businesses in the state are owned by blacks, compared to 7% nationally—are given a disproportionate amount of media attention as candidates set up shop in the state and kowtow to every farmer and evangelical Lutheran in the state. True, it’s our first look at the candidates who would be President, but at this stage of the game does anyone believe Michelle Bachmann, who won the Ames Straw Poll in Iowa, is going to be the Republican nominee for President?

The state has literally no resemblance to the rest of the 50 states in the USA, and can in no way be considered reflective of the country as a whole. Nor has Iowa been predictive in any consistent way (consider that 2008 Republican candidate for President John McCain was 4th in the Iowa Caucus that year).

What the Iowa boondoggle has shown the American people is that the current crop of pretenders to the throne rise and fall, into and out of favor, like the proverbial tide. None has had any staying power. After Bachmann’s win in the Straw Poll (a wonderfully vivid name) she was quickly replaced by the Evangelical’s Savior Rick Perry, until Perry made the repeated mistake of speaking. Herman Cain had his moment in the fairground spotlight, until he dropped out of the race in adulterant humiliation.

Perpetual Iowa favorite Ron Paul has never risen to the cream of the crap, but has a rabid band of supporters and will likely remain in the race until many state primary elections are in the bag. Mitt Romney, High Priest of the Latter Day Saints, has at times acted as if he was in the General Election rather than campaigning in small town America, but still holds a slim lead as the Little Day approaches. The latest poll indicates that 40% of the caucus goers are still up for grabs, as they’ve indicated that they can still be persuaded. Apparently the televised debates, which seem to occur weekly like bad reality television programs, haven’t given these folks enough information yet.

The best part of this Midwestern tradition in presidential politics is that once it’s over, there is a high likelihood that some of the lower tier candidates will fold up their tents and go home, back to whatever they do when they’re not trying to convince us they should lead the free world. 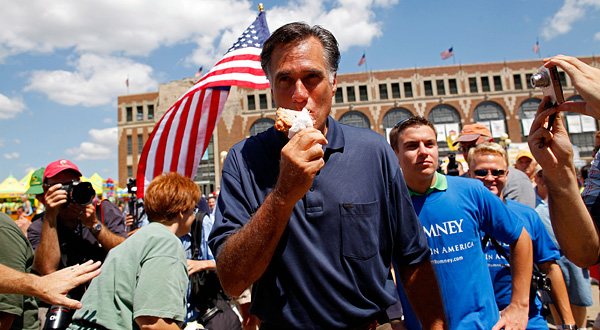