Human beings like patterns. Our brains make sense of the visual inputs we get by assembling things we see or hear into expected models. Biologically, this is a very useful brain function as it would have allowed our ancestors to better survive when they imagined the face of a predator in the tall jungle grass, even if turned out to be just a pattern of grass, twigs and shadows that looked like a ravenous beast. A rustle through the trees may be the wind or it may be a hungry predator. Falsely believing that you’re about to be something’s lunch is more beneficial than assuming it’s just the wind. If you thought it was a salivating, razor-toothed carnivore and it was wasn’t, you’re still alive and you’ve learned something. If you thought it was probably just the wind and it wasn’t, you’re not going to leave any descendants.

Our brains are now hard-wired to perform this pattern-seeking function and it creates all manner of false impressions, including the Man in the Moon, UFOs, hearing voices in the wind, and more. Perhaps the most frequent, and entertaining, false impression is seeing Jesus Christ in all manner of unexpected and highly unlikely places.

What I find most fascinating about the fairly regular spotting of the Supreme Being in grilled cheese, pizza, toast and other mundane places is that no one knows what Jesus actually looked like, if he even existed at all. The patterns we regularly see that we interpret as a bearded man could have been interpreted as anyone from Charles Manson to an unknown man sporting facial hair. But the devout, and even the not-so-devout, see Jesus Christ.

The earliest historical writings that mention Jesus are Paul’s letters to the Galatians, dated to approximately the year 49. This would mean Jesus had been dead for 16 years or so when his name first appeared in “print.” There is no physical description of the man in Paul’s writing. Neither is there a description of him in the writing of the Jewish scribe Josephus, which is when we next read about Jesus, more than 20 years later. None of the Gospels describe him physically, and they were all written even later, so we’re left to imagine the physical form that was the Son of God in Bronze Age Palestine.

Here’s an image created by the BBC of what a Hebrew male during the time of Christ might have looked like. Jesus, if he ever lived at all, may have looked something like this: 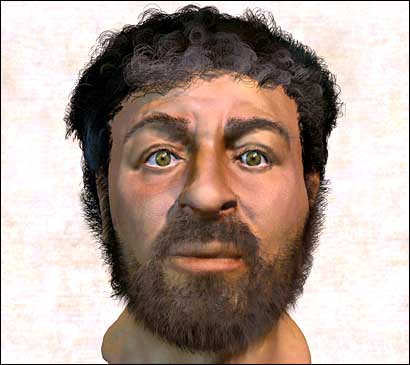 The image modern humans think they see on their grocery store receipts in a splatter of grease is the expected appearance of Jesus based on our knowledge of him from devotional paintings, sculptures and other art that were originally commissioned by the Church. These images, passed along for generations, become the expected model of the Son of God, so that any pattern that resembles the pattern of a long-haired, bearded man, becomes Jesus to our pattern-seeking brain. Even a ghostly image on the back of a stingray is proclaimed a visitation from on high.

So the next time you see a bunny rabbit in the clouds, mistake the shadow of a tree for a person, see the footprint of Bigfoot in the woods or have a visitation from The Almighty in your oatmeal, remember that you’re the product of billions of years of natural selection and there was a time when seeing a saber-toothed tiger in the jungle where there was none, would have kept you alive to stroll through the jungle another day.