The United States Is Not, And Never Was A Christian Nation

The Constitution of the United States is the supreme law of the land. It is literally the framework on which our system of government is built. It creates the three branches of government, specifies the duties of each, and provides the individual states and their people the powers that aren’t specified in the Constitution. It’s a remarkable document that is the oldest written Constitution still in use.

The first ten amendments to the Constitution are collectively known as the Bill of Rights. In essence, the Bill of Rights is a limitation on the powers of the Federal Government over the citizenry.   The very first of these prohibits Congress from making any law with regards to the establishment of a religion.

The Establishment Clause of the First Amendment prohibits federal, state or local governments of establishing an official religion, or even a preference for one religion over another, or non-religion over religion, etc. You will often hear about the separation of Church and State when religion and politics are discussed, but that doesn’t actually appear anywhere in the Constitution. Thomas Jefferson first wrote that phrase in a letter to The Danbury Baptists Association. In it, he responded to their concerns that the state of Connecticut lacked sufficient protection from government establishment of religion. President Jefferson assured them that the American people, through their legislature, had declared that there would be no law respecting an establishment of religion or prohibiting the free exercise of it, “thus building a wall of separation between Church and State.” 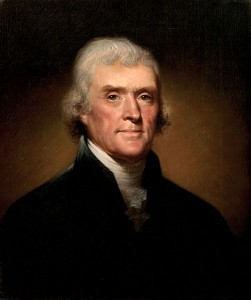 In Article VI of the Constitution, which basically states that the Constitution is the law of the land, the founders specified that no religious test shall ever be required as a qualification to any office or public trust in the United States.

In 1796, the Treaty of Tripoli was drafted by Joel Barlow, signed and witnessed, unanimously ratified by the Senate, and signed by President John Adams taking effect as the law of the land. What’s so important about this treaty? Let’s have a look at it:

As the Government of the United States of America is not, in any sense, founded on the Christian religion; as it has in itself no character of enmity against the laws, religion, or tranquility, of Mussulmen; and, as the said States never entered into any war, or act of hostility against any Mahometan nation, it is declared by the parties, that no pretext arising from religious opinions, shall ever

produce an interruption of the harmony existing between the two countries.

Well that’s pretty specific, and it was unanimously ratified. No dissenting voices were heard. That’s almost hard to imagine in today’s political environment. So as to be no confusion about the breadth of the document, here is President Adams’ signing statement:

Now be it known, That I John Adams, President of the United States of America, having seen and considered the said Treaty do, by and with the advice and consent of the Senate, accept, ratify, and confirm the same, and every clause and article thereof. And to the End that the said Treaty may be observed, and performed with good Faith on the part of the United States, I have ordered the premises to be made public; And I do hereby enjoin and require all persons bearing office civil or military within the United States, and all other citizens or inhabitants thereof, faithfully to observe and fulfill the said Treaty and every clause and article thereof.

Christianity believes that Jesus Christ was the Son of God, that he was resurrected from the dead and rose bodily into Heaven. Christianity believes Jesus is part of the Holy Trinity, the Godhead, comprised of God the Father, Jesus the Son, and the Holy Ghost. Christianity is quite specific to these tenets. So if the founders of our nation were Christians, and intended for the United States of America to be founded on and guided by Christian principles, there should be some evidence to that effect.

The Constitution of the United States does not have the words God, Jesus, Christ, Christian, Trinity, Christianity or Holy Ghost anywhere among its pages. Not once. And the word religion is only mentioned twice, and both times it is to prohibit it. Once to prohibit Congress from passing any law establishing a religion, and once to ensure no religious test is ever required to hold public office.

So the next time someone tells you that the United States is a Christian nation, merely ask them to prove it. They won’t be able to because there is no proof, because it isn’t true.

Tags: government, religion, Separation of Church and State, US Constitution

← The Ex-Pope
Is Pope Francis Confused, or Talking To God? →