There’s still a chasm to cross

The Wall Street Journal, that bastion of free-thinking, unbiased reporting and opinion, ran an Op-Ed in which the author claims that scientific evidence about the Universe we humbly reside in is showing us the evidence for God. The author capitalized the deity so I assumed he was thinking of a specific god. Rather than run the risk of making an ass of you and me (an Odd Couple episode I’ve never forgotten since childhood), I checked him out. Mr. Metaxas won 2010’s coveted Christian Book of the Year, from the Evangelical Christian Publishers Association, so I think it’s a safe bet to assume Eric is speaking of the Christian God when he proclaims that scientific advances are making it more likely true that the 3-headed God of Christianity actually exists.

You can read the essay here and what you’ll find is a combination of frequently used arguments for the existence of an intelligent designer; a creator being of some type. The Argument from Improbability is a popular one, and he goes there right away. I cover the Finely Tuned Universe argument in my book, because it’s one of my favorites. Just looking at the Earth and its spectacularly unstable surface of tectonic plates, wonderfully astounding violent weather phenomena, perilous position in the Solar System making it susceptible to asteroid strikes, five or possibly six Mass Extinction events, and the breath-taking, awe-inspiring nuclear reactor around which it orbits, that gives us life sustaining energy while also giving us cancer, is so not finely tuned for life that even on the surface, this argument is a joke. Last but certainly not least, he tosses in the Argument from Design which has been around as long as people have been around, and refuted by the actual evidence scientists have been working on since 1859.

The first thing I’d like to clarify is that an argument for anything isn’t evidence of anything; but just an argument trying to create a plausible premise or a logical possibility. So nowhere in the essay did the author present any evidence for the God he is referring to. But what I want to do here is not refute his arguments because you can read that anywhere with a quick Google search (talk about omnipresent, Google seems to have that down), or in my book (which I’d love for you to read) but instead to grant Eric Metaxas and anyone who thinks his arguments are good ones the benefit of the doubt. Let’s go ahead and assume that we don’t have better explanations for the improbability of life, the laws of physics or the apparent design in nature, but that an Intelligent Designer was at the controls and dialed up all the natural laws and created all of life (including the bacteria that devastate our species) through the power of His awesome imagination. Even if that were the case, even if these concepts of physical constants in the Universe, the seemingly unlikely fact of life on Earth and what appears to be a cleverly constructed design that lets hummingbirds drink nectar from deep within flowering plants all couldn’t be explained in any way other than to point to a Creator Deity, there’s a chasm of distance between that and “therefore, Jesus died for our sins.”

In no way does the Argument from Design, the Argument from Improbability or the Finely Tuned Universe argument even attempt to point to the God of the Bible. By the way, have you ever considered that all of God’s activities took place in one tiny speck of desert in one of the less literate parts of the Middle East? 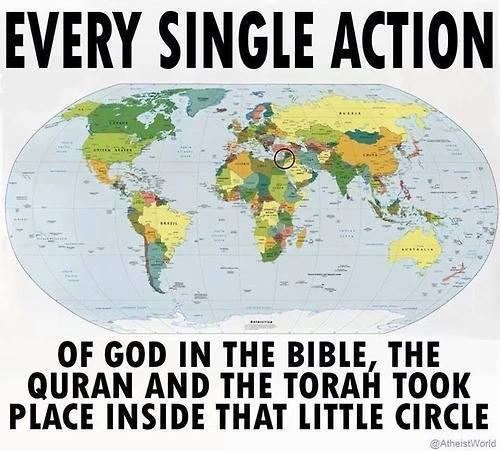 In fact, every religion on Earth can make the exact same claim about their chosen god. Clearly the arguments that point to an Intelligent Designer don’t preclude that Designer from being the Lord Brahma, or perhaps Mbombo, or Ra, or Horus or a god we don’t know at all! These arguments are mental manna for the faithful so that they can plug in whatever god they currently believe in and apply the same arguments and take extra pleasure in the fact that there seems to be some science behind it. If Mr. Metaxas was honest, he’d tell you that all he had was old material with a bit of a twist and that it didn’t point to his God anymore than anyone else’s. I’ll even go one step further and grant anyone moved by these arguments the final word on the subject: “Yes, your arguments point pretty conclusively to some kind of intelligence with intent to bring about the Universe. Now can we just leave it there and not pretend that the intelligence cares about whether women use birth control?”

← The Devil is Real
Romancing the Cancer →