I’m actually starting to bore myself writing about Pope Francis, but some things can’t be avoided. When the civilized world comes out in support of freedom of expression, and the condemnation of violence done by the easily offended, the leader of the Catholic Church, dogmatically considered the Vicar of Christ on Earth, pronounces boldly that physical violence is the response one should expect if one dare ridicule the ridiculous:

“If my good friend Dr Gasparri says a curse word against my mother, he can expect a punch in the nose.” Throwing a pretend punch, the Pope said: “It’s normal. You cannot provoke. You cannot insult the faith of others. You cannot make fun of the faith of others. There are so many people who speak badly about religions or other religions, who make fun of them, who make a game out of the religions of others,” he said. “They are provocateurs. And what happens to them is what would happen to Dr Gasparri if he says a curse word against my mother. There is a limit.”¹

Well, that’s clearly stated is it not? The Pope, who supposedly influences hundreds of millions of Catholics worldwide, has instructed all who follow him that physical assault is the right response for anyone who dare mock Catholic beliefs. I suppose that also means Catholics can expect to be physically assaulted for poking fun at Scientology. I guess Catholics can also feel free to haul off and whack a Protestant who mocks Catholicism’s idol worship.  If one were to, perhaps suggest, that the idea that Joseph Smith was led to magical golden tablets in upstate NY by an angel was a tad suspect, they can expect to be clubbed by Mormon thugs. So when Sam Harris told a large audience during a debate that if you said some Latin words over your pancakes at breakfast and believed that turned them into the body of Elvis, you’d lost your mind, but if you believed roughly the same thing over a plate of crackers, you’re just a Catholic, the Pope would have no issue with him being beaten up by the God-Fearing Jesus-lovers in the audience.

Not only is the Pope unethical and supporting violent suppression of human rights–although I suppose credit is due to him for not calling for a mass burning of all blasphemers which prior Popes have done with considerable skill–but he does so a week after the murder of cartoonists in Paris by the faithful, who slaughtered a dozen humans because their religion was insulted and mocked. It is shameful, it is mortifying and the Pope should be called to account for inciting violence.

The Pope is on record stating that Satan is a real being, and that demonic activity is actively plaguing the Earth. He believes the Creator of the Universe impregnated a young Palestinian woman with His Ghost sperm so she’d give birth to His son, who was also Him, so that He could sacrifice Himself to Himself to forgive humanity from Himself. He believes in transubstantiation, in human immortality, in the resurrection of the dead, all on the basis that some semi-literate Bronze Age men, men who hadn’t the slightest idea what was happening in the world, scratched some stories on parchment. He leads an organization with so much blood on its hands, it’s impossible to accurately assess the extent of misery and human suffering they have caused. His army of clerics have poisoned the minds of countless children and added a little rape for extra trauma. Mockery seems a small price for this degree of absurdity, debauchery and depravity.

Not only can I and anyone else on Earth insult his beliefs (and calling them “faith” doesn’t change a thing) but the facts actually demand us to! And now to add insult to injury, he calls upon violent physical assault against any of us who dare mock the absurd and baseless ideas of every single religion. Well your Holiness, you are wrong about so many things, and you are wrong here again. I claim the right to say what I wish to say, and you have the same right. But your rights end where they violate mine, and assaulting me ain’t very Christian of you.

If anyone slaps you on the right cheek, turn to them the other cheek also. And if anyone wants to sue you and take your shirt, hand over your coat as well. If anyone forces you to go one mile, go with them two miles. Give to the one who asks you, and do not turn away from the one who wants to borrow from you. You have heard that it was said, ‘Love your neighbor and hate your enemy.’ But I tell you, love your enemies and pray for those who persecute you,  that you may be children of your Father in heaven. ~ Jesus Fucking Christ. 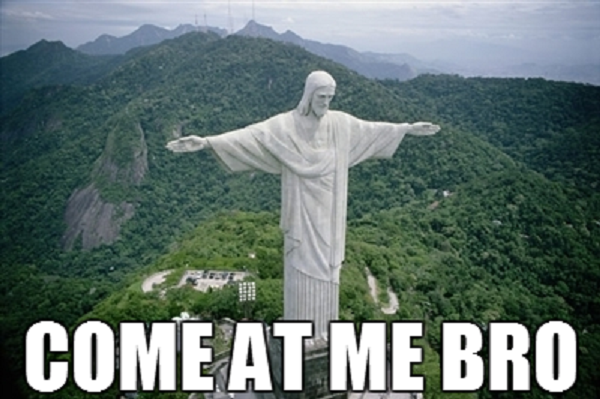 ¹ Pope Francis: “You cannot make fun of the faith of others.”