I suppose if a man insists on running for President, people who cover such things for the press will occasionally speak to them, and perhaps publish something they say. There can be no other reason for the continued press coverage of a man who is apparently unemployed at the moment, but once governed a small southern state and spent time jabbering on a FOX News show.

I could probably write an extensive post about the utter nonsense that spews from this self-proclaimed Bubba seemingly every time he gets in front of a microphone, but I’ll stick to the most recent absurdity because I have a very low tolerance threshold for blatant, flagrant hypocrisy.

Mike wrote a letter to the management at Frito-Lay because he took offense to their limited edition Doritos. 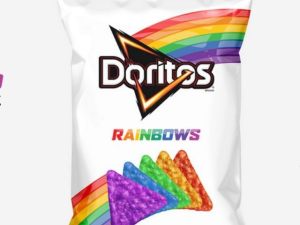 Mike may claim to be an advocate of free markets and less government intervention in the affairs of business, but he seemingly has no issue with interfering in this publicly owned company’s business affairs because he doesn’t like gay people, particularly if they are allowed to get married (which they are). So there’s a little hypocrisy already, but it gets much more egregious than that.

In the letter, the Huckster calls upon Frito-Lay to sever all ties with the It Gets Better project, an organization designed to help young people. Their mission is to communicate to lesbian, gay, bisexual and transgender youth around the world that it gets better, and to create and inspire the changes needed to make it better for them. Mr. Huckabee advised Frito-Lay’s management that if they refuse his demands, that Huckabee will make the Christian community aware “…that Frito-Lay has decided to not seek their business.” We have arrived at the hypocrisy du jour!

Not long ago, a certain fast food establishment made their position about homosexuality clear by donating millions of dollars to anti-gay groups. That chicken shack goes by the name of Chick-fil-A, and their president went quite public after the news of his company’s donations became the subject of criticism. He doubled down on the bigotry and said that marriage equality was “inviting God’s judgment on our nation.” I also take issue with people who speak for the Creator of the Universe, and also with Chick-fil-A generally for putting pickles on a grilled chicken sandwich, but I will stick with the issue at hand for now. How does Mike Huckabee fit in here? I’m glad you asked.

Mike Huckabee denounced the backlash against Chick-fil-A and the call by some to boycott the establishment–which I boycotted years ago over the pickle issue–as “economic terrorism.” So there it is; as plain as the expanding jowls on Huckabee’s face. If boycotting Chick-fil-A for their anti-gay position–which they backed up with millions in hard, cold cash–is terrorism, then Mike Huckabee has declared himself a terrorist by his own hand, and in writing. He has threatened a publicly owned company in these United States that if they don’t change their policy, Christians will stop purchasing their products.

I want to be clear that the source of my agitation is not Christianity, it’s not homosexuality, it’s not Frito-Lay or Chick-fil-A, but Mike Huckabee and him alone. He insists on seeking to lead this nation but has shown himself repeatedly to be abominably unfit for the position. He is now, by his own description, an economic terrorist. The Osama bin Laden of the snack food industry if you will. While his threats are idle ones, as he no more speaks for all Christians than I do for all pickle haters, he does have some level of influence and certainly as the leader of our nation, he would have significant influence. So his extreme views, which as we’ve seen are also duplicitous, are a real and present danger and they must be exposed for the benefit of all.

Now if I could only get someone to read this, I could avenge the cause of truth.